It’s fast, it’s cost-effective, and it has revolutionized the delivery of rig crews working on some of the world’s biggest offshore oil fields.

The new Sea Bus service introduced last year by Saudi Aramco’s Marine Department at Tanajib marks yet another major initiative undertaken as part of an ongoing marine business transformation. The new offshore transportation services, which tie in with the department’s efforts to continuously upgrade services, follow the successful implementation of the Marine Offshore Floating Hub at Tanajib.

The Sea Bus service operating out of Tanajib Pier ticks just about every box in Saudi Aramco’s framework for Operational Excellence. The service uses dedicated Fast Crew Supply Vessels (FCSVs) and have exceeded all expectations.

The need for the Sea Bus service resulted from the increasing numbers of offshore oil drilling rigs, which raised the demand on Aviation to transfer additional rig crews and critical equipment to and from rigs. Crew transfers were previously conducted by helicopter, with the new service taking a considerable load off of Aviation while also reducing transportation costs.

Among the many benefits of the new program are the cancellation of the procurement of 14 conventional crew boats; a reduction of the load on the rotary wing (helicopter) fleet, thereby resulting in an extended maintenance window availability for helicopters; and a reduction of greenhouse gas emissions due to the reduced number of required vessels. It is estimated that the program will result in a cost avoidance of about $40 million annually by eliminating the need for the 14 additional vessels as well as the resulting reduction in flights.

After inception of the program in early 2016, more than 45,000 passengers were safely transported from the Tanajib Marine Facility by year-end 2016, with approximately 55,000 passengers per annum expected to be transferred in subsequent years.

The service, which covers the Safaniyah, Manifa, Zuluf, and Marjan oil fields, is an ongoing initiative of the Marine Department’s Logistics Transformation Model that will eventually be rolled out to cover all offshore passenger and equipment transfers. All offshore passenger transfers are centralized at a single point of control, thereby maximizing deployment and availability of the service.

The operation is dynamic in nature. Priorities can shift quickly from normal operations to emergencies or urgent passenger and cargo requests. We have to be adaptable and flexible to tailor our plans.

An example of Saudi Aramco’s commitment to our corporate safety values, the FROG offshore transfer system was introduced in April 2016 to improve safe transfer of passengers to and from the rigs.

Basically speaking, the FROG system is a crane transfer capsule that allows for rapid and safe movement of personnel between the FCSVs and the offshore installation or rig, and vice versa.

The system has been in service offshore for 20 years, and there are now 800 devices in operation worldwide with over a million passenger transfers taking place each year. The FROG system has revolutionized the way the industry conducts personnel transfers.

The Saudi Aramco Marine Department is currently using the FROG-XT6 capsule that protects passengers from falling, collisions, and heavy landings. It has a medevac stretcher for the evacuation of an injured person and is buoyant and self-righting in water. It also has seats fitted with quick release three-point harnesses to restrain passengers, and a spring suspension system to cushion landings.

Operational Excellence The Marine Department’s Sea Bus initiative is another step-change in the way Saudi Aramco manages offshore oil and gas operations. The latest technologies and equipment have been procured to provide safe, reliable, and efficient offshore transfer services.

The initiative is an outstanding example of how the Operational Excellence “Plan/Do/Check/Adjust” approach has been effectively implemented to achieve cost savings for the company.

The service is successfully managed by a dedicated team of young Saudi dispatchers, — a crucial cog in the company’s future. The experience of managing this safety critical aspect of offshore personnel transfer will better equip these future leaders for the challenges that they may one day face.

There are currently two FCSVs that are being utilized for the Sea Bus Service — Alya McCall and Seacor Leopard.

The Alya McCall features a waterjet-propelled monohull design with a top speed of 38 knots, a capacity for 100 passengers, and 327m2 of deck space for cargo. The passenger area has large LCD screens, DVD, WiFi and stabilized satellite television that works anytime on the move.

The vessel has a ride-stabilization system to enhance passenger comfort and is fitted with a DP2 dynamic position system for accurate station keeping alongside rigs.

The Seacor Leopard is a waterjet-propelled catamaran design with a top speed of 42 knots, capacity for 135 passengers, and 260m2 of deck space for cargo. It has a VIP and conference area refreshment center, large LCD screens, DVD, WiFi, and stabilized satellite television.

The vessel has high-tech equipment installed on the bridge for navigating safely at high speeds. The vessel has a ride-stabilization system to enhance passenger comfort and is fitted with a DP3 dynamic positioning system for excellent station keeping alongside rigs. Additional safety features include standby safety certification. 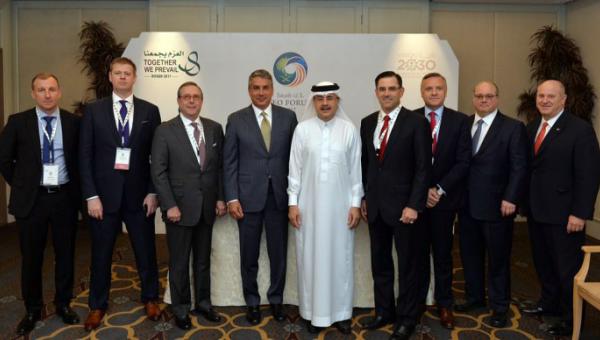 Agreements signed to promote bilateral trade and investment between Saudi Arabia and U.S.

Saudi Aramco has signed agreements with major U.S. companies which will pave way for the company to enhance its business synergy with the U.S. as well as attracting investments from its U.S. counterparts to the Kingdom. 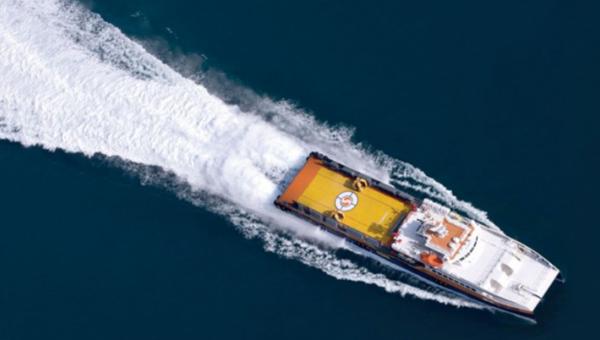 Marine Department offers innovative solution for offshore passengers: It’s fast, it’s cost-effective, and it has revolutionized the delivery of rig crews working in the Tanajib area. Where helicopters and crew boats once transported workers and equipment, two Fast Crew Supply Vessels — the Alya McCall and Seacor Leopard — dash between locations in a more efficient and safe manner. Able to reach speeds of up to 42 knots, these two vessels also have a capacity of at least 100 passengers each, as well as hundreds of square feet of deck space for cargo.